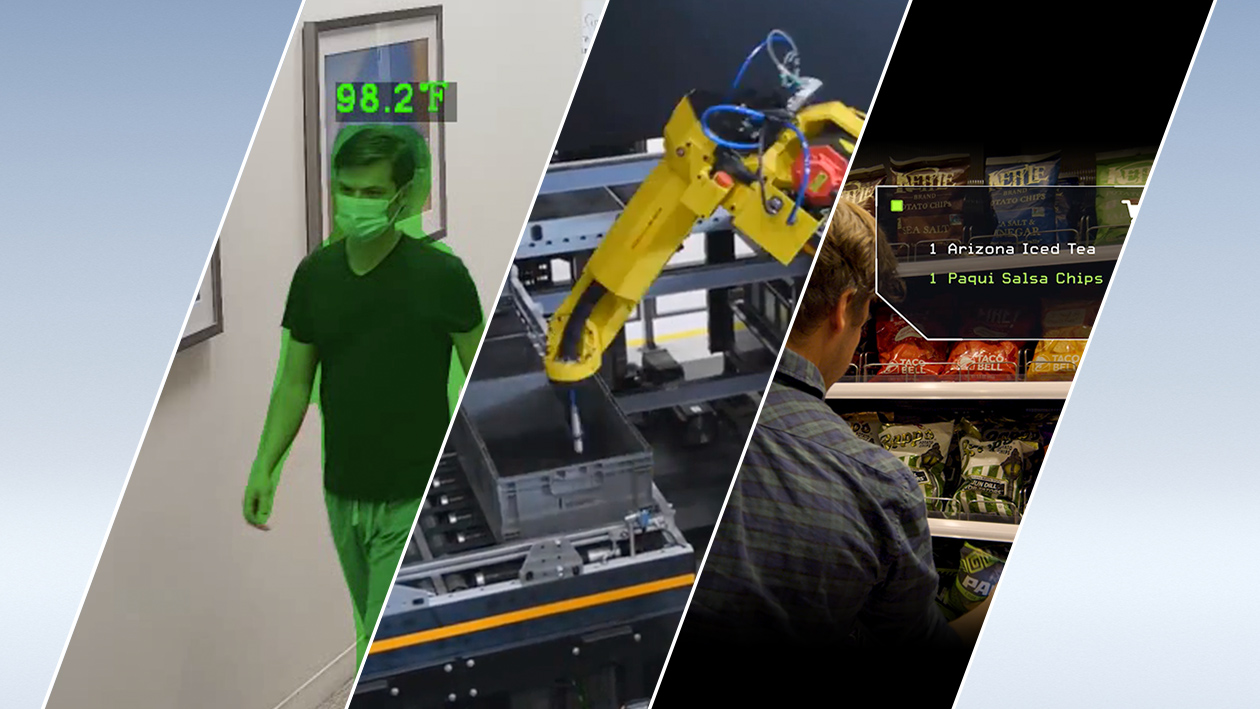 “NVIDIA is a computing platform company, helping to advance the work for the Da Vincis of our time – in language understanding, drug discovery, or quantum computing,” Huang said in a talk delivered from behind his kitchen counter to NVIDIA’s GPU Technology Conference. “NVIDIA is the instrument for your life’s work.”

During a presentation punctuated with product announcements, partnerships, and demos that danced up and down the modern technology stack, Huang spoke about how NVIDIA is investing heavily in CPUs, DPUs, and GPUs and weaving them into new data center scale computing solutions for researchers and enterprises.

He talked about NVIDIA as a software company, offering a host of software built on NVIDIA AI as well as NVIDIA Omniverse for simulation, collaboration, and training autonomous machines.

Grace is a highly specialized processor targeting largest data intensive HPC and AI applications as the training of next-generation natural-language processing models that have more than one trillion parameters.

While the vast majority of data centers are expected to be served by existing CPUs, Gracewill serve a niche segment of computing.“Grace highlights the beauty of Arm,” Huang said.

Further accelerating the infrastructure upon which hyperscale data centers, workstations, and supercomputers are built, Huang announced the NVIDIA BlueField-3 DPU.

Where BlueField-2 offloaded the equivalent of 30 CPU cores, it would take 300 CPU cores to secure, offload, and accelerate network traffic at 400 Gbps as BlueField-3— a 10x leap in performance, Huang explained.

Grace and BlueField are key parts of a data center roadmap consisting of 3 chips: CPU, GPU, and DPU, Huang said. Each chip architecture has a two-year rhythm with likely a kicker in between. One year will focus on x86 platforms, the next on Arm platforms.

Expanding Arm into the Cloud

Arm, Huang said, is the most popular CPU in the world. “For good reason – it’s super energy-efficient and its open licensing model inspires a world of innovators,” he said.

DGX – A Computer for AI

The new DGX Station 320G harnesses 320Gbytes of super-fast HBM2e connected to 4 NVIDIA A100 GPUs over 8 terabytes per second of memory bandwidth. Yet it plugs into a normal wall outlet and consumes just 1500 watts of power, Huang said.

The DGX SuperPOD gets the new 80GB NVIDIA A100, bringing the SuperPOD to 90 terabytes of HBM2e memory. It’s been upgraded with NVIDIA BlueField-2, and NVIDIA is now offering it with the NVIDIA Base Command DGX management and orchestration tool.

Expanding the NVIDIA-certified servers ecosystem is a new wave of systems featuring the NVIDIA A30 GPU for mainstream AI and data analytics and the NVIDIA A10 GPU for AI-enabled graphics, virtual workstations and mixed compute and graphics workloads, announced today.

Huang also discussed NVIDIA’s AI-on-5G computing platform – bringing together 5G and AI into a new type of computing platform designed for the edge that pairs the NVIDIA Aerial software development kit with the NVIDIA BlueField-2 A100, combining GPUs and CPUs into “the most advanced PCIE card ever created.”

“Omniverse was made to create shared virtual 3D worlds,” Huang said. “Ones not unlike the science fiction metaverse described by Neal Stephenson in his early 1990s novel ‘Snow Crash’”

Huang announced that starting this summer, Omniverse will be available for enterprise licensing. Since its release in open beta partners such as Foster and Partners in architecture, ILM in entertainment, Activision in gaming, and advertising powerhouse WPP have put Omniverse to work.

The Factory of the Future

To show what’s possible with Omniverse Huang, along with Milan Nedeljković, member of the Board of Management of BMW AG, showed how a photorealistic, real-time digital model — a “digital twin” of one of BMW’s highly-automated factories — can accelerate modern manufacturing.

“These new innovations will reduce the planning times, improve flexibility and precision and at the end produce 30 percent more efficient planning,” Nedeljković said.

A Host of AI Software

He detailed new models for Clara Discovery — NVIDIA’s acceleration libraries for computational drug discovery, and a partnership with Schrodinger — the leading physics-based and machine learning computational platform for drug discovery and material science.

To accelerate research into quantum computing — which relies on quantum bits, or qubits, that can be 0, 1, or both — Huang introduced cuQuantum to accelerate quantum circuit simulators so researchers can design better quantum computers.

And to help customers turn their expertise into AI, Huang introduced NVIDIA TAO to fine-tune and adapt NVIDIA pre-trained models with data from customers and partners while protecting data privacy.

“There is infinite diversity of application domains, environments, and specializations,” Huang said. “No one has all the data – sometimes it’s rare, sometimes it’s a trade secret.

The final piece is the inference server, NVIDIA Triton, to glean insights from the continuous streams of data coming into customer’s EGX servers or cloud instances, Huang said.

‘Any AI model that runs on cuDNN, so basically every AI model,” Huang said. “From any framework – TensorFlow, Pytorch, ONNX, OpenVINO, TensorRT, or custom C++/python backends.”

Autonomous vehicles are “one of the most intense machine learning and robotics challenges – one of the hardest but also with the greatest impact,” Huang said.

NVIDIA is building modular, end-to-end solutions for the $10 trillion transportation industry so partners can leverage the parts they need.

Huang said NVIDIA DRIVE Orin, NVIDIA’s AV computing system-on-a-chip, which goes into production in 2022, was designed to be the car’s central computer.

And Volvo Cars announced during the GTC keynote today that it will use NVIDIA DRIVE Orin to power the autonomous driving computer in its next-generation cars.

The decision deepens the companies’ collaboration to even more software-defined model lineups, beginning with the next-generation XC90, set to debut next year.

Meanwhile, NVIDIA DRIVE Atlan, NVIDIA’s next-generation automotive system-on-a-chip, and a true data center on wheels, “will be yet another giant leap,” Huang announced.

Atlan will deliver more than 1,000 trillion operations per second, or TOPS, and targets 2025 models.

“Atlan will be a technical marvel – fusing all of NVIDIA’s technologies in AI, auto, robotics, safety, and BlueField secure data centers,” Huang said.

Huang also announced that DRIVE Sim will be available for the community this summer.

“The DRIVE digital twin in Omniverse is a virtual space that every engineer and every car in the fleet is connected to,” Huang said.

The ‘Instrument for Your Life’s Work’

Huang wrapped up with four points.

NVIDIA is a software platform company and is dedicating enormous investment in NVIDIA AI and NVIDIA Omniverse.

NVIDIA is an AI company with Megatron, Jarvis, Merlin, Maxine, Isaac, Metropolis, Clara, and DRIVE, and pre-trained models you can customize with TAO.

NVIDIA is expanding AI with DGX for researchers, HGX for cloud, EGX for enterprise and 5G edge, and AGX for robotics.

“Mostly,” Huang said. “NVIDIA is the instrument for your life’s work.”

Thank you to Nvidia, Brian Caulfied